Where does Intelligence Reside? 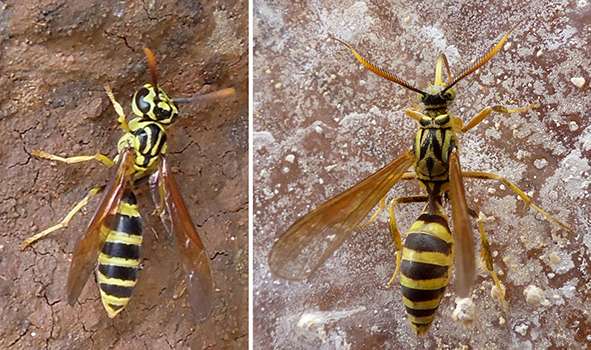 The one on the left is a wasp, the one on the right is a moth. The question is; Where, how and on what level does the intelligence by which this mimicry takes place reside?

If we define intelligence as the ability to acquire and apply knowledge and skills, examples of mimicry like the example detailed in this story (linked below) have always left me wondering how a biological organism would be able to perceive and respond, at whatever level it takes, to recognize and assemble this cloak of deception without some capacity to sense “other minds” as well as a capacity to carry out a morphological change in response to that recognition of what’s going on in the mind of the other species…

For this moth to drape itself in the cloak of a wasp is a remarkable event, which we seem to be able to adequately describe, but our descriptions are certainly not explanations. In terms of explaining the event, what we typically call out, (adaptation, which is a description, not really an explanation) seems inadequate on its own without some kind of recognition of a sophisticated capacity for conceptualization and response embedded in the biological framework going on at some level that produces this sophisticated expression of adaptation. Just thinking out loud here.

The Power Law and The Nature of Systems

Zipf’s law, also known as the power law identifies the uncanny consistency of the frequency of behaviors in natural systems, including complex organized adaptive systems like biology. For instance; the frequency of the most used word in any language no matter where it originates will occur approximately twice as often as the second most frequent word, three times as often as the third most frequent word, and so on.

Ziph’s law goes by other names, such as the power law, but the orderly distribution of relative frequency is remarkably consistent across many systems, these include physical, biological, and social systems. City populations follow this distribution. So do the sizes of craters on the moon, the strength of solar flares, the frequency of behavior patterns such as sex or foraging in various animal species as well as the sizes of activity patterns of neuronal populations, volcanic eruptions, and so on. It is also true of social systems.

This information on Ziph’s law has a lot of implications if it is fully unpacked. If we extract the value from what it means we might consider the fruitless waste of time it is doing things like angrily baying at the moon over the 1%, or whatever name is given to primary social influencers. Changing Ziph’s law seems fairly unlikely to succeed no matter how loudly we squeal. It is perhaps a more effective strategy to focus instead on the fact that we are all responsible for the tone of the relationship climate we all live in and contribute to.

Based on the fact that natural systems arrange around this law, including social systems, a more effective thing would be to build a social economy based on how much we can give to each other, rather than how much we can get from each other. In this way those who, in the future, will assume the inevitable mantle of having the most influence might also be inclined to behave with these same values. Even if this took a couple generations to take root and bear fruit, it would be worthwhile. A quote attributed Gandhi, perhaps falsely, but good advice no matter where it came from comes to mind; “Be The Change You Want To See In The World”